England Vs Germany – Battle of the Classic Cars

Tuesday saw one of the most anticipated clashes of Euros 2021, with England vs Germany. The long-standing rivalry goes far beyond strikers and goalposts, though. The battle is more prevalent on the road than it is on the pitch for some of us.

E-Type or 911? Allegro or Golf? Mini or Beetle? Choosing between British beauties and German Gems can seem like an impossibility. Both nations have designed and produced some of the best and most capable cars in the world. Over the decades, when one of these countries was at its car-producing peak, it’s made it almost impossible to beat.

As such, the idea of pitting one against the other may seem an incredibly daunting task. It would be unwise – foolish even – to bet against the Beetle or dismiss a Dolomite. We look at some classic English and German vehicles and decide who wins when pitted against each other.

Feel free to let us know what we got right – and what you think we got wrong.

There are possibly no more familiar car shapes than that of the Mini and the Beetle. Let’s not forget that both the Mini and Beetle have created showstopping legacies not just with their loyal fans but even in terms of copycats from other brands. As they say, imitation is the highest form of flattery.

It’s undeniable that Volkswagen won the sales race by a landslide, selling almost four times as many Minis. However, the trendsetter proved to be the British vehicle’s designer, Alec Issigonis, who chose a transverse-engined front-wheel drive; this continues to be the more popular choice for cars to this day. While the Mini is considered to have superior road-holding and is more fun to drive, the Volkswagen is more robust, and if it does break, it’s much easier to repair than the Mini.

Each car has a number of variants, and car enthusiasts have adored their mechanicals for many years. Choosing a winner comes down to one factor – Motorsport. The German car is certainly no stranger to competition, but it has nothing on the Mini, whose wins have been far superior. Therefore, Mini wins! 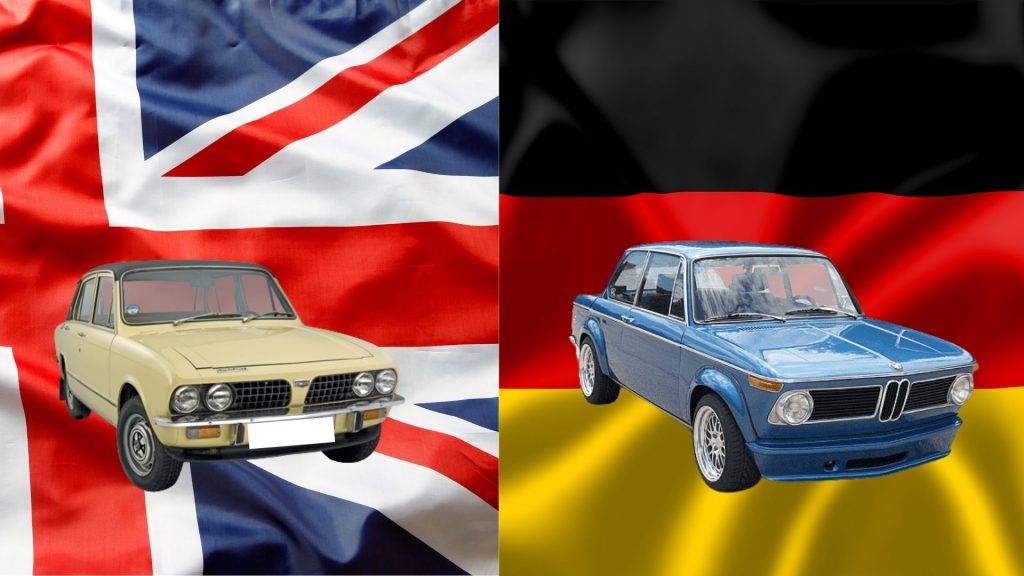 BMW had a six-year head start on the Triumph, which didn’t hit the roads until 1972. Surprisingly, despite being produced earlier, the BMW was far more sophisticated with a semi-trailing arm rear axle to the Dolly’s live axle. The 2002 also had more remarkable bhp; 98 to the Dolly’s 91. In the year following its release, the Triumph did up its game with a 2-litre four-cylinder whose bhp jumped impressively to 127bhp. It could get from zero to sixty in 8.4 seconds.

However, its success was short-lived; BMW produced the 2002 tii. It edged the Sprint by a mere single horse, and it actually weighed more as well. This didn’t stop the BMW 2002 tii from being quicker, though. Returning to Motorsport, BMW had a far more illustrious international career and, as such, the 2002 tii takes the medal here.

You would be forgiven for assuming that BMW will take this one as well. After all, like so many German cars, the BMW 5-series has had a much more significant impact on the car industry since first being released. But actually, Rover is the clear winner here. This example of when the British car industry got it right means that the Rover SD1 deserves to sit on the winner’s podium with cars like the Mini, E-type and MGB.

The 5-series superseded the “Neue Klasse” range. These saloons were responsible for dragging BMW out of the slums in the early 1960s. The 5-series, with its independent suspension and showstopping six-cylinder, was beautifully built, but the SD1 was far more forward-looking.

It has to be mentioned that the V8 Vitesse quite match the 215bhp of the M535i; however, its touring car victories secure the Rover SD1 the win here.

Some may say this is an unfair matchup; however, when the VW Golf made its debut in 1974, the hopes of British Leyland resided with the Austin Allegro, a car the people loved to hate. Although the Allegro was longer, the two vehicles were similar in size. Each had an option for two or four doors, and they cost a similar amount.

The British Leyland car mechanicals was the more forward-thinking, adopting Alex Moulton’s clever Hydragas suspension. It was also fitted with a super-compact transverse A-series engine. However, the Golf excelled in its execution, having been built perfectly. It was later succeeded by the GTi, which dealt the ultimate death blow to the Allegro.

With the score at two-all – which country will win? 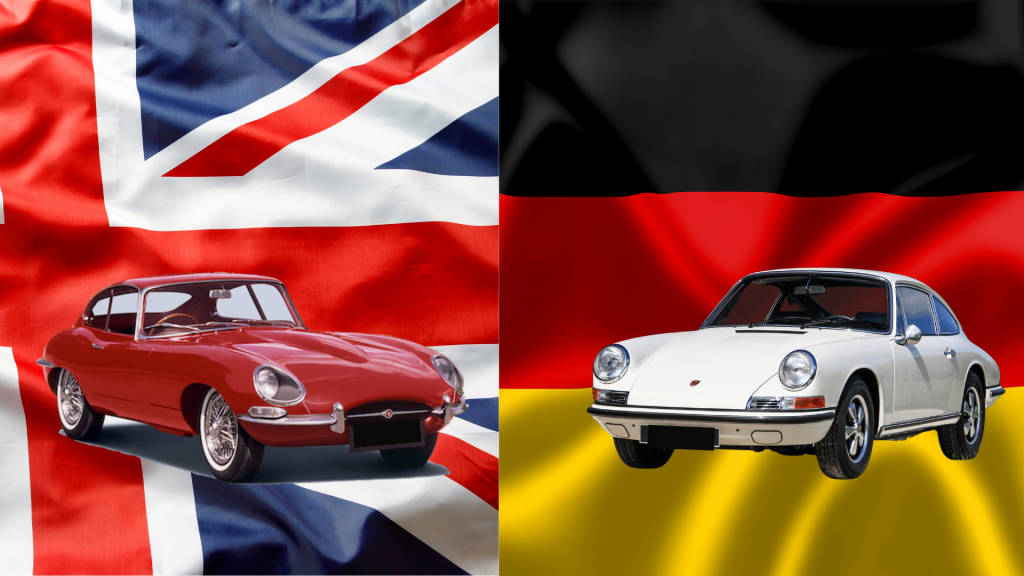 Easily the sports cars of the 1960s, our final battle sees the E-type and 911 go head to head. The two vehicles were undoubtedly very different, and yet both have consistently been deemed ‘iconic’.

Jaguar, with its impressive 140+ mph, brought beauty and performance to the average enthusiast. Its debut made the Porsche 356 seemingly insignificant in its presence, that is until the 911 arrived.

Proving an incessant thorn in Jaguar’s side, Porsche has continued to exude their prowess release after release. The 1964 911 may have seemed a wallflower compared to the flashy Jag; however, its topsy turvy layout belied an incalculably proficient player in the proverbial car game. This battle, it seems, like many, comes down to Motorsport. This truly is Porsche’s playground. The 911 has proven itself to be a force to be reckoned with for over 50 years.

We realise this is subjective, and looking at other factors could easily tip the scales here. Germany may take the medal in our car battle, but it is little condolence for their crushing loss at the Euros earlier this week.